WE ARE THE GARDEN
installation, video, 2020

“This is how it started: The insects disappeared first. If you went out to a meadow in summer, you felt as if something was missing there. At first, no one would have guessed what. It was just somehow quieter. The flowers were also low. Winters were shorter and stranger, summers dry and hot. It all took place gradually, little by little, and people got used to it.“

Situated in a dystopian future, there are few people who have survived the consequences of climate change. They are those who created safe, protected environments, with enough supplies, water sources, who escaped forest fires and floods. The air is hardly breathable due to large dust particles. To create a healthy environment for humans, it is necessary to create a closed biosphere, where the air people breathe comes from a small garden attached to their houses. This physically recreates the lost connection between nature and the human world. To survive the harsh conditions, we have become part of the garden, while the garden has become part of us.

The project follows the story of a man and a child – a small girl –, who live in the future after the climate crisis lonely, unsure if the rest of civilization still exists. The story is put in written form, but paintings, drawings, objects and a video complete the mosaics – attempting to portray life in a dystopia, where the previous conditions of living (belonging to society and a larger community, hope for a better life) have ceased to exist. 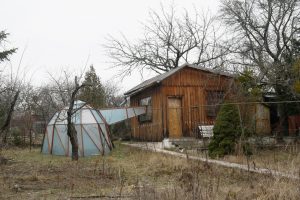 The main part of this project is physically present in a real garden in Košice, Slovakia: a wooden house for living, a glasshouse for planting, and the garden itself. The space and the fruits of nature are shared by a community of friends. The interior of the house functions as an art space where objects, paintings and drawings have become part of the fictional story and mix with reality.